Well, Day One is in the books and even at half a day it was a whirlwind of readings and meeting lots of fine people dedicated to the craft of writing and the art of poetry.  Festival Mastermind Stan Galloway, a professor of English at Bridgewater, has convened an eclectic group of poets here to this cozy college, and a roving gang of 18 student volunteers has helped support the festivities with tech help, directions, pizza and, of course, coffee.

Once the festival really got going, you are faced with two different reading locations, each hosting two poets an hour. I was paired with Jim Gaines, which was a good match as we were both working on translations as well as on our own work. Some other interesting or odd tidbits from Day One:

Emily Hancock of St Brigid’s Press, along with several other supporting literary establishments including the Georgia Review, whose editor Stephen Corey can be counted among the poets presenting their work, were present and selling their books. Although I forgot to mention this in my own reading today, three of my works are available at the St Brigid table — the broadside of the prose poem Drop Everything, a handsome broadside with moon-shaped matting of my translation of Li Ho’s Sky Dream, and the omnipresent haiku coaster sets.

I survived my own reading early in the afternoon with the help of a supportive audience. Twenty minutes can seem like an eternity or like the snap of a finger when you’re reading your work. If you’d like the silent virtual tour of what I read, you can follow the links below. On to Day Two!

Poem for the Back Cover of a Book

Self Portrait at Forty Nine

On Translating a Poem from the Chinese

Mei Yao-ch’en and I Lament Missing the Lunar Eclipse…

Mei Yao-ch’en and I, Walking Downtown for Pizza on a May Afternoon…

…Mei Yao-ch’en and I Await Fourth of July Fireworks… 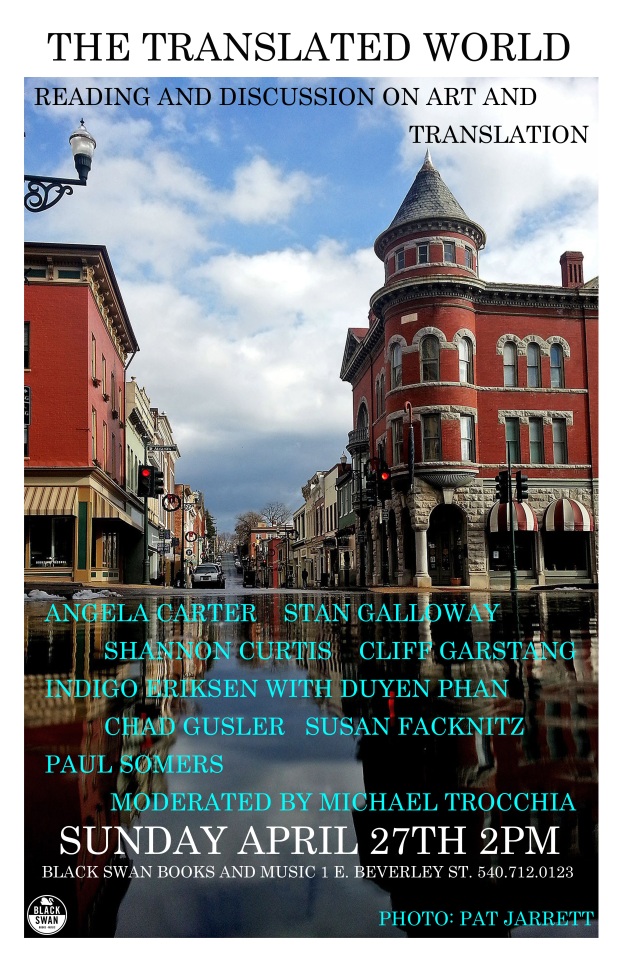 I will be checking out this rather cool topic in my rather cool and little city this weekend. Angela Carter and Stan Galloway are area poets whose work I have enjoyed hearing in person.

Printer extraordinaire Emily Hancock of St Brigid Press will also be bringing copies of the mini-broadside of my translation of Li Ho’s “Sky Dream” for the event. I will not be selling this myself and I’m not sure if Emily has it for sale yet on her site, but you can always write her if you’re interested in seeing more. The poem is printed on very thin Unryu paper backed by grey Magnani Pescia paper, in Bembo typeface. The matting creates the shape of the moon which of course our poet Li would not bother to name in his brilliant and strange piece of verse, and will I think be available in a variety of night-sky-ish colors.

I believe St Brigid Press will also be issuing this poem’s companion translation of Li Po’s work, as well as a few other translations of classical Chinese verse. And of course as I attend this event I’ll be taking with me my time-travelling version of Mei Yao-ch’en, the great 11th century poet with whom I have spent so much time these last few months… 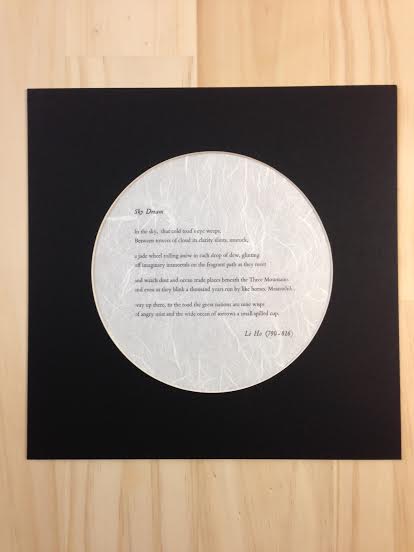 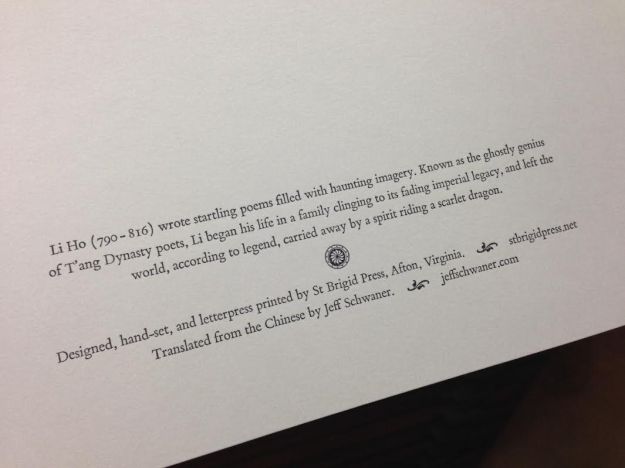 Thank you, Li Ho: [Reading 3/8/2014 at Allen Chapel AME Church in Staunton VA as part of “Rhythmic Time Between the Lines”]

Today I spent a few hours just a few blocks from my house, in a part of the world that was almost entirely foreign to me, and by bringing in a piece of work that was equally foreign I believe I helped contribute to something meaningful. Or maybe I should say that I believe that Chinese poet Li Ho (b.790) contributed–but I brought that guy with me, after all…

I was invited to participate as a member of the local writers group in a fundraiser to celebrate 21 years of the Allen Chapel AME Choir. Also there to read or perform in this small brick church said to be the oldest church established by people of color west of the Blue Ridge mountains were a handful of other poets, dancers, singers, students, and even a talented mime.

After a couple of dancers and a few poets whose work seemed pretty in tune with the occasion and the religious nature of the setting, I introduced the congregation to my old friend Li Ho. I talked about Chinese poets of the 8th and 9th centuries and how many of the things they wrote about–mountains, snow, sky–were important elements of our lives in this town. I then read the prose poem “On Translating Poetry from the Chinese” and after that read my recent translations of poems by Li Ho and Li Po.

I can tell you that in a AME church setting, people behave like they are in church. That means if they hear something they like, you know it before you’re done reading that line.

I wasn’t reading poems about God, I wasn’t giving an uproarious rendition of a Nikki Giovanni poem, I was not preaching to the choir (no pun intended)—I was bringing to this room some words and ideas that were utterly foreign to those in attendance. And they immediately got it. And I believe the reason they got it was because they were open to it and they were actively listening. That’s what they came there to do every weekend, and that’s what they were doing now–listening and responding, line by line, it seemed, to the words of a man born in 790 CE, and another born in 701 CE. For the poet born in 1965, the enthusiastic applause for each of the three poems I read was not just polite–it was part of the celebration. It was a celebration of being there, and being alive, and listening.

Later, in his closing remarks, the church’s pastor Rev. Dr. Edward Scott was speaking quietly and personally about a recent tragedy that rocked this church community, that being the death of his daughter just a few weeks ago. He was talking about suffering, the intense suffering of the dying, the grieving of the survivors, and how upon his return from Raleigh he did not at first wish to return to church, or see or talk to anyone; but how he put on his tie and shirt and shiny shoes and came to church today to listen. “And today,” he suddenly boomed in a style which I am sure was quite familiar to his congregation, “I heard tell of a TOAD on the MOON!”

He intuitively had grasped that ancient symbol, that distant watcher, as a way to connect us in that meeting hall to a Malaysia Airlines plane crash that had just happened that day–how beneath that moon was more suffering that must be met, more survivors in far-away places that must come home to grieve and be supported by their communities.  He instinctively grasped the moon as elemental to identifying with missing and missed loved ones, just as Li Po and Li Ho did in their time. He found his own grief instructive, channeling it through twelve lines of verse written twelve hundred years ago and everything else he’d seen and heard that hour, into a vision of a shared world.

Suddenly I didn’t feel like my contribution to this celebration was quite so foreign, after all.  And for that I can thank two Chinese poets I have never met, and one newly-met pastor of an America I’m still discovering.

In the sky, that cold toad’s eye weeps.
Between towers of cloud its clarity slants, unstuck,

a jade wheel rolling anew in each drop of dew, glinting
off imaginary immortals on the fragrant path as they meet

and watch dust and ocean trade places beneath the Three Mountains
and even as they blink a thousand years run by like horses. Meanwhile,

way up there, to the toad the great nations are nine wisps
of angry mist and the wide ocean of sorrows a small spilled cup.

Moon’s so bright before my bed
I mistook it for frost glowing on the floor.

I lift my head, and old hopes, to that moon,
then back down, eyes full of a dream of home.