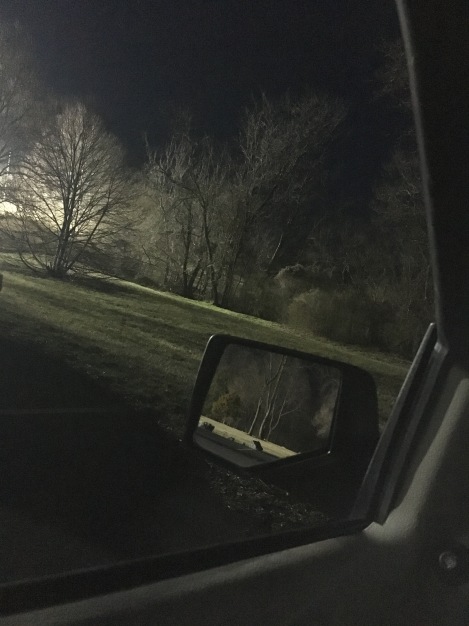 Landscape, mild February night, with parked car in lot by field and trees and second smaller landscape closer than it appears

Mid-dusk turns gray green; image on an old TV.
The shadow on a rock thrown by the lot’s

Like coffee in a cup after a sudden brake spills,
Returns, spills again. Go out eleven steps

On the tree in the school parking lot. The wind
Passing through them has a different accent.

From a driver’s seat you can look backward
Without moving your head. Without thinking.

You imagine a speeding car coming up beside
You, too late to stop moving into the same lane.

The future can keep only one of you intact.
But blink and it is only three trees, on the lot’s

Far edge, in some complex leafless interaction
With the rest of the world which has no idea

How much they see. Don’t take those gestures
For scenery. They have been waiting here

A hundred years to warn you that the past is
Speeding up and passing you on the left. 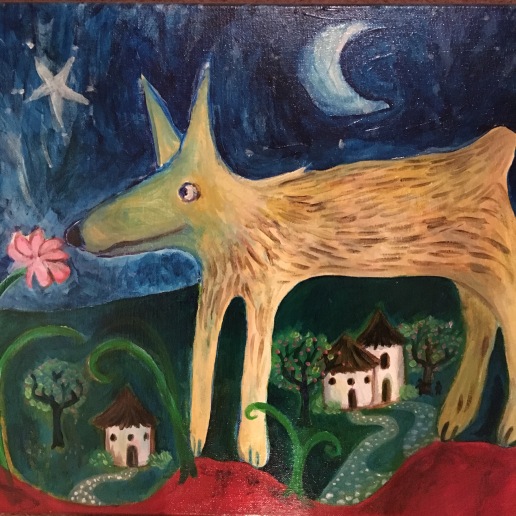 Landscape, with a small city in the mind

Even when nobody can see what is
Skirting the village lights,

a sleeping dog’s ear may twitch
To death’s threadbare approach.

A vulture pulls stillness out of crosswinds,
Becomes a null sum that is beauty,

An ever adjusting stillness mending
The ugly and the invisible,

Right above the house, whether you
Are looking or not. I have heard the sigh

Of loblolly pines scratching their shorthand
Onto the sky’s white page. Everywhere I see

Words except where words are. The news
Is sheet music for yesterday’s song.

Leaving night in its tense wake.
And at the edges, a visitor

You have to welcome. You know that
Voice, like the long space at twenty minutes

Past the hour, when it seems the next
Hour will never arrive. Even the church bells are

Weather-stopped. And over the hill
The wind is coming 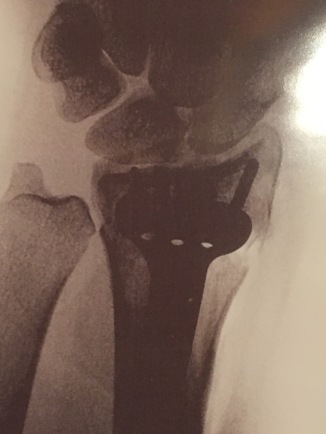 Valentine song via a metal plate in my wife’s wrist

Indivisible. Foreign. Tongue with no words.
I steady you. All the while

The heat that holds us together
Bores through bone, bonds.

I am not what broke you
But I will help you bear the weight.

You will heal around me.
My unity with you is when

I am forgotten and your thumb’s
Unthinkingly nimble

With a pen, a paintbrush
A doorknob, a drink, a day.

The width of the white wall
On either side of six

Inches of air is all
That connects

You to the ground
Speeding beneath

You to the past

Monsters wait at the margins.
Tackling anything head-on

Sometimes wondering
If everything I do when

Awake if everything
Good is the dream time

I call you
To tell me I’m wrong

Because I could
Not dream you

for Geoffrey Hill and Frank Miller

Spiders spill out of a storm struck oak
On the rim of my childhood’s forest.

Of furry mindlessness, lost hands scrambling
For their owners across the crumbling bark

Toward the drowned crown’s leaves’
Black and brown shadows. Who was the eleven

Year old boy, barely a root,
And who was the hundred ringed world widener

Downed by a bolt? Who jumped from bank to bank
The great Skunk River’s rimey surface?

Looking for a clue, we found it: a footprint
Filled with muddy rain

Some understanding, though adulthood
Stared us in the face with what we didn’t see.

Dead tree, ghost ship of tarantulas.
If all those hands would clasp in prayer

They’d pray for what we knew at almost twelve
When the time to go home was when it got dark,

An ever shifting time, and we’d shake our sneakers
Upside down by the garage wall and bang

The soles against the gutter pipe and
Watch nameless dead things fall out:

Past the shadowed edge of half a century’s wood
I stop, and stoop in thought,

And recognize that single track, abandon
All the things I thought I’d grasp.

Climb on, boy: we met when I was old.
Don’t let me dodge the lightning till I rot.