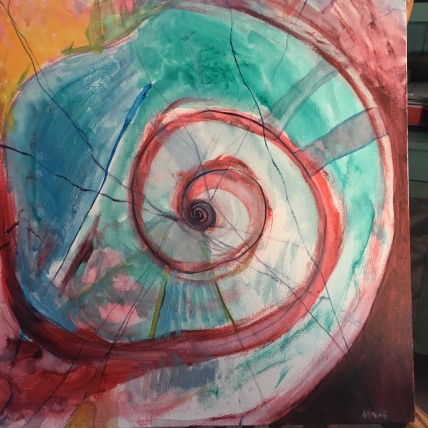 for Geoffrey Hill and Frank Miller

Spiders spill out of a storm struck oak
On the rim of my childhood’s forest.

Of furry mindlessness, lost hands scrambling
For their owners across the crumbling bark

Toward the drowned crown’s leaves’
Black and brown shadows. Who was the eleven

Year old boy, barely a root,
And who was the hundred ringed world widener

Downed by a bolt? Who jumped from bank to bank
The great Skunk River’s rimey surface?

Looking for a clue, we found it: a footprint
Filled with muddy rain

Some understanding, though adulthood
Stared us in the face with what we didn’t see.

Dead tree, ghost ship of tarantulas.
If all those hands would clasp in prayer

They’d pray for what we knew at almost twelve
When the time to go home was when it got dark,

An ever shifting time, and we’d shake our sneakers
Upside down by the garage wall and bang

The soles against the gutter pipe and
Watch nameless dead things fall out:

Past the shadowed edge of half a century’s wood
I stop, and stoop in thought,

And recognize that single track, abandon
All the things I thought I’d grasp.

Climb on, boy: we met when I was old.
Don’t let me dodge the lightning till I rot.

7 thoughts on “Saproxylic (for Geoffrey Hill and Frank Miller)”