On Drinking a Portuguese Wine on the Last Night of June

This is how the month tasted, too. Full and lush on the front,
a vacation rental that is not too big or expensive but rich.

On the back, like the sound of surf slipping through the sand,
the taste of something going away, complexity escaping completion, dry on the tongue.

[Hear a recording of this poem here.] 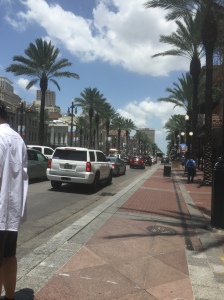 A moth hovers by the closed door and moves on in its hectic pattern.
For a moment I can see my life in the invisible inscriptions of his path.

and of course present official state identification.
So that this moth might be allowed to fly. Instead, he nods off tiltingly

on his own wings.

The wall of windows looking out on the runway
shows the sky, mountains and land on a photographer’s grid. Clear

of obstacles. In its reflection on the smoky inner windows leading
to the security check the sky is a rainbow gone haywire —

refractions off reflections. This is how it looks when you have
to break the truth into its elemental colors. They come out

as something else, warped and wary, wavy but unmoving.
Always looking like they were caught doing something.

But it’s not the truth that does the damage.

In the plane the woman from New Orleans, flying back to bury her dad,
tells us all to stay out of the neighborhoods, or anywhere there’s no light.

It is hard to avoid all the dark places in the map of one’s mind
but I try to follow her advice as I drift off in my corner room.

I don’t know how much later, that series of soft knocks on all of our doors, even high up
on the 20th floor. I could have dreamed the knuckle on the door.

It could have been my own hand curled in that soft and uncertain fist.

My eyes fog up when I walk Canal Street in the early morning.
No, it’s my eyeglasses. I walk the streets farsighted

welcoming the humidity inside.

In the hotel bars it is the same time all morning afternoon and night.
Not too early and not too late.

I just had breakfast and looking through the glass wall to the stools beyond
I can see the face of the clock that never changes.

It looks like a paper coaster seen through the bottom of an empty glass.
it looks through me to the back of my head and scratches something there

like a memo. It is the sound of brown magnolia leaves resting on a palmetto frond
in a hot breeze. It is the music of painted stucco. Red, yellow, mustard, red.

A street gutter that is never dry.

Three locks on the hotel door.
two visible, and one I cannot see.

The top lock, a long loop of metal like a tongue.
that is always sticking out. It can hold the door open, or closed.

Just below it, the oblong lever that moves the unseen
dead bolt. To add to my security, but from what?

Then, the invisible one I cannot control.

When the door shuts it locks automatically.
Only with the key the shape of a playing card can I open the door. It can never be unlocked or ajar.

Its weight swings it shut and it locks How did we get to the place in the world
where a closed door is always a locked door?

where you need a key not to protect what is yours
but just for passage into the next foreign space.

Still the room is hushed, even in a thunderstorm.
Lights bounce outside off the high buildings

but it is like children bouncing a ball in the neighbor’s driveway.
And the housemaid has crafted a turtle sculpture out of two towels,

and left it beside the bottled water, the ghost tour coupon, and the chicory coffee.

[Author’s note: I was asked to be part of a great reading at Black Swan Books in Staunton, Virginia on Friday June 17th. Although I was in New Orleans for a conference that week, I wrote the poem below, then recorded it on my phone, interspersing audio of three street musicians I recorded on walks over the course of the week. It seemed a shame to miss the reading, which was all about the relationship between writing and music, when I was staying in a place of such varied musical heritage. This poem is one of three works I prepared for the reading, which were then played at Black Swan. The recording can be found here. –JS] 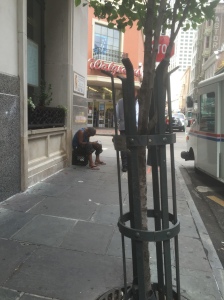 again and once again after something unseen

a small level space on the outside of a house
I will never enter. The breeze

in my mind comes from someplace else and the thought banks impressively
in the same way logic sometimes makes us think we have direction.

the whole reason the thought took flight is that this is the time
the memories come out of the earth and rise;

what they are doing there I do not know. Inside my house
in each room ceiling fans are rotating just above lamps shaped like leaves.

Perhaps they are turbines of an unknown will, a helicopter fleet in reverse
trying to keep the house from flying up in the air as it eventually will

like the tiniest memory of something bigger than my life
rising into the chasm of June light.