Come to the Wind Intervals book launch tonight at Black Swan Books. If you are holding the right program, you could win a fine piece of letterpress printing from St Brigid Press! 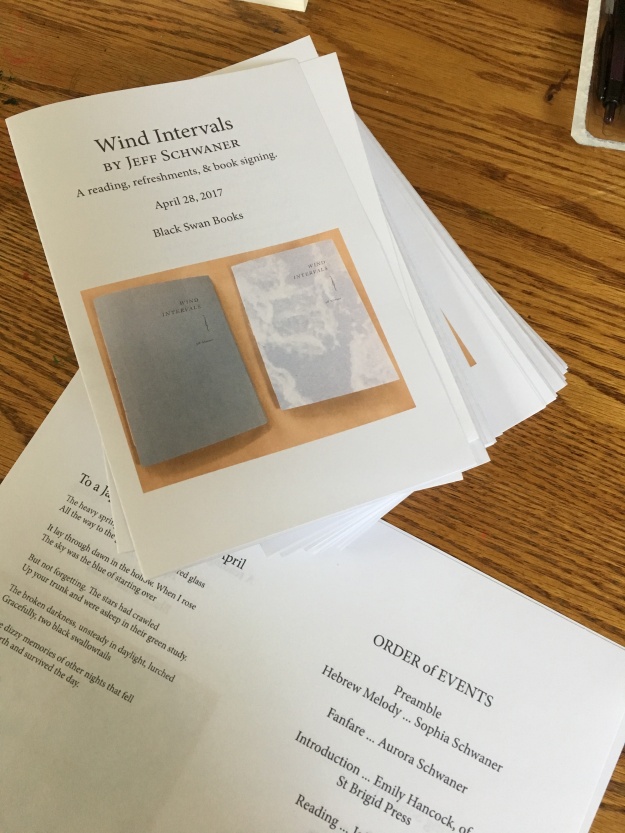 The programs are folded and numbered. The books are printed and bound. The home-made Langues de Chat (cat-tongue cookies!) are cooling by the oven. The coffee is ground and ready to be brewed.

It’s time to launch this book.

Yesterday I met Emily of St Brigid Press to sign pre-orders for Wind Intervals. I was amazed to find that over two thirds of the special edition are already spoken for.

I hope to see some familiar faces — and some new ones — tonight at 7pm. I have tinkered with the idea of recording the reading or broadcasting it via Facebook Live; we’ll see what we’re up for by the time we get set up.

Hope to see you there! 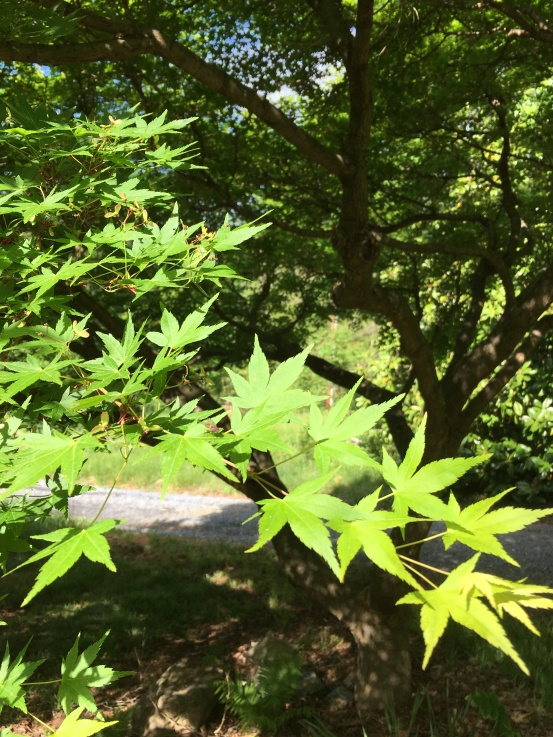 To a Japanese maple in mid-April

The heavy spring rain pulled the night
All the way to the ground. Like shattered glass

It lay through dawn in the hollow. When I rose
The sky was the blue of starting over

But not forgetting. The stars had crawled
Up your trunk and were asleep in their green study.

Like dizzy memories of other nights that fell
To earth and survived the day.

Author’s note: This Japanese maple, located in Afton, Virginia, provided the leaves for the leaf-print illustrations in my new book Wind Intervals. 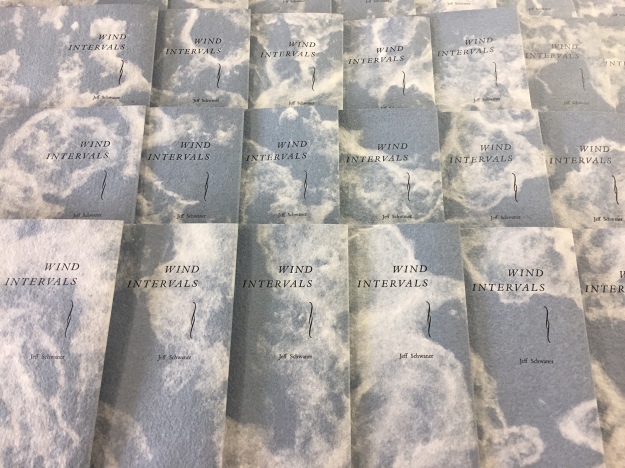 As the publication date of Wind Intervals — and its accompanying book launch on April 28 at Black Swan Books in Staunton, VA — draws near, I took some time this morning to drive over Afton Mountain to visit Emily Hancock at St Brigid Press to get a glimpse of the first bound books. (Of course I took a few copies away with me.)

It may be because I brought Emily a big cup of black coffee which she really did not need, but soon we were engaged in a rambling high speed talk about what it’s like to be the designer and printer of a book of poems in a letterpress environment. I started recording about halfway into our talk and wanted to share it with you in case hearing two people get nerdy about printing presses and book design and handmade paper is your Kind of Thing.

We talk about the making of the amazing hand-made cover paper for the special edition of Wind Intervals (seen in the photo above); how it’s likely that a letterpress printer spends more time typesetting and printing a poem than the poet spends writing the poem; we introduce weird words like “couching” — pronounced “cooching” — to the Poor Listener; we talk (I think!) about the use of actual Japanese maple leafs for illustrative printing inside the book; we talk about the relative stupidity of deciding to go with leaf print illustrations in the dead of winter when there are no leaves to go out and pluck from the trees outside; and Emily talks about the makeup of the two editions of the book and the materials that went into each.

The Japanese maple that loaned us the leaves for the illustrations stands just about twenty feet from the entrance to the Press. It’s in full leaf now, as is much of the mountainous area around us.

If any of that interests you, check out our rambling and entirely unedited conversation below or here.

To find out more about Wind Intervals and to pre-order a copy before the April 28th book launch, check out the blog at St Brigid Press. 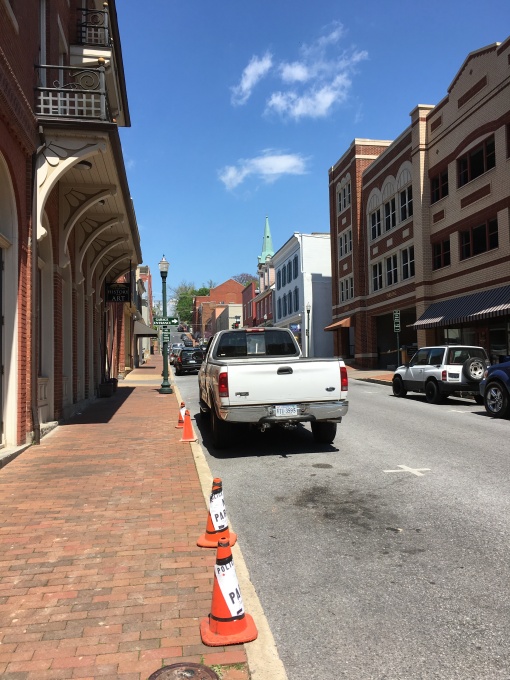 Spring morning in a small city

Table on the sidewalk. I, too small to be a meal for time
and commerce, slip through, discarded, on the quiet street

With my coffee. The sky is the blue of a baby’s iris.
A baby as big as a galaxy who is far from forming

Thoughts cohesive enough to create a world.
The only clouds in the sky slip together

Over the street into a momentary shape, a character
in a language not native to me but familiar.

I watch it pull itself apart. The city places orange cones
Around me to protect me while I stare and take a picture.

When I get home I discover it is the Chinese character
For “write.” I sit down with some paper and a blue pen

As the sclera of a baby’s eye, of a galaxy whose
Unformed thoughts are rolling inward. The city blinks and

Before anyone can take a picture the day smashes its tail
on the surface of afternoon and is gone into the depths.

My boy’s breathing is fine. The moon is late rising,
The palm of night presses down. A few stars.

To investigate things with clarity. A few windy
Mornings ago I drove my son to the hospital

After he could not stand up because of the pain.
The night pressed in on the windows of the car.

Though it was perfectly still outside my panic
Drove the air into my resisting frame.

Are indivisible. After morphine and the three
Incisions, after the handcuffed prisoner

Who swallowed metal things was rolled out
Of the ER, after the appendix, vestigial

Like a scholarly appendix, was removed
Zhu Xi was an untouched cup of coffee.

In the back seat because you are
Beside me. Zhu Xi pressed against

Through closed eyelids to appear on
His wing. My son’s breathing is fine.

Is the heart’s canopy, where we walk across the shapes
Of what’s gone missing but nothing is buried where

The ground heaves up with the work of the woodland
Cultures. They knew the shapes were what

They’d built from earth to impress themselves.
The fleeting things don’t really come and go–

They are among us still, in your hand on my back.
In how far a word will fly to reach its nest.

Tonight there’s a silent starling waiting in the walnut grove

Uncle Tom Shortall’s gone, is dead
more myth than relative taller than life
whose eyes were higher than my father’s head
whose booming voice was an open door

Author’s note: Tom Shortall was a beloved and to me legendary figure in my family’s Christmas Eve parties. It was not an official Christmas Eve until the Shortall family arrived. This poem doesn’t do justice to his life, of which I do not know much, but hopefully does justice to how big and generous a personality he was to the boy I was and still to some extent am. -JS

Before a Spring Storm

Who am I in the porch’s silence
Before the storm? A song

Of any more sense
Than mindless wind chimes?

Until something drowns them out
Knocks them down or finishes

Happening their silence means
Not that nothing is happening

Because nothing cannot happen
Nothing is not phenomenal any

Wind chime could tell you but rather
That whatever may be

Happening is not moving them
Nevertheless they have enough

To sing a song that chases
Rain faster forward into flower

making everything that’s tender
a trial: though it’s permanent, the

loss, I mean, the swelling goes
and takes the tenderness away

even when you may want just
a little to stay. Absence, though,

can inflate like a nylon balloon
on a cool spring morning: filled

with warm emptiness absence takes you
Above it all, floats you over the impasse

that seemed impossible to cross
on foot, shifts perspective to higher

thoughts: here in this basket
of bewilderment and wonder,

you can stay with me even
a little longer than we thought.