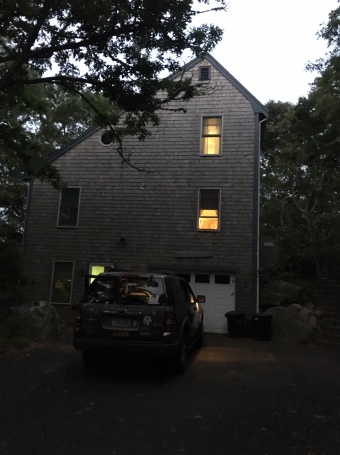 Sister, the song keeps restarting
And each time it is a different song

That house
The wind comes through the upstairs

Window like the house is breathing in
Before starting a song

Note: I gave this family remembrance in honor of my father Walter Schwaner at his funeral mass today in Lincoln, RI.

“We have to follow the police officer,” my father told the family as he climbed back into the station wagon. It was the 1970s, we were on our way to Cape Cod, close to the Sagamore Bridge. Dad had been caught running a red light in the Friday afternoon traffic. The state trooper and my father talked for a long time outside the car while we sat anxiously inside.

The trooper pulled off the main road, and my father followed him.

“Are you being arrested?” we asked him.

“No,” Dad said simply. A hint of a smile. “He’s going to show us a short-cut around this traffic.”

Skip ahead a few years. After Little League, where my father had coached my teams, I joined a Babe Ruth baseball team. I came home from one practice discouraged. The players had so little respect for the coach that the only thing they had done as a team was push his Volkswagen bug onto its side in the parking lot. Hearing this story over dinner, my father calmly said, “Huh. Maybe he needs a little help.” The next practice Dad was there, quietly standing by the bench and offering his assistance, and the mood of the team changed considerably. “Assistant Coach” Schwaner taught the kids how to sacrifice bunt, hit to the opposite field, steal a base, position fielders to help each other — and turned us unruly teens into a team.

Nearly forty years later, on my last trip to Dad’s home on Cape Cod, I found myself taking photos for my wife of the many statues of Jesus of the Sacred Heart in my parent’s old bedroom.

My father built the house when I was a child and it has always been the family’s sacred ground to me; to my wife Mary, it’s a place of spiritual transformation. One day years ago she saw those statues on the dresser, the bookshelf, the sewing table and felt changed by their iconic open-hearted gestures. That June day also happened to be the Feast day of the Sacred Heart, and this idea of an open-hearted God has been central to her life since then.

If you’re here today you’ve probably been witness at some point or another to my father’s open-heartedness, his casual welcoming nature, his way of enabling others to do better, which is at the core of coaching, which he so loved to do.

For his open-heartedness, Dad was rewarded by a life surrounded by people whom he loved and who loved him— family, neighbors, long-time and new-found friends.

He didn’t preach the positive, he just accomplished it. The last word I heard Dad say? It was “yes.” In a crowded room discussing his fate, he spoke up above the doctors when I asked over the phone from Virginia if he wanted to leave transfusions and chemo behind so he could go home. He spelled it out loudly so I could hear– “Y. E. S.”

That “yes” to death is not easy. Because the hard work of dying must be done by the dying.

The hard work done by survivors is an important part of being alive. It is in fact the main fulcrum of a faithful life— our faith in God, our faith in each other, our faith that being human is living a realistic, generous love in all our relationships— these elemental values teeter on our response to the deaths of loved ones. These moments try us, but reward us in manifold complex ways.

A wise young poet once wrote:

When joy goes to work
Sadness must take care of you.

I’ll let the sadness take care of me for the time being, until joy gets back from work, just as my dad would get home from work to my childhood home and bring with him a sense of things being right, and calm, and me being permanently in good hands.

During my trip to the Cape weeks ago, I stopped at a used bookstore I’ve been visiting for five decades, and found a battered translation of Lao Tzu’s Tao de Ching, or Way of Life. A stanza of this ancient poem seemed to express that openness to vulnerability we see in Jesus of the Sacred Heart, and that was so elemental to my father’s life:

A sound man’s heart is not shut within itself
But is open to other people’s hearts:
I find good people good,
And I find bad people good
If I am good enough;
I trust men of their word,
And I trust liars
If I am true enough;
I feel the heart-beats of others
Above my own
If I am enough of a father,
Enough of a son.

It doesn’t strike me as odd that I found these words exactly when I would most understand them. It strikes me as enough. That like my father often did, I can look around me, even in sadness, and find more than enough for a good day, a good life, if I am open-hearted enough.

I learned it from my dad. 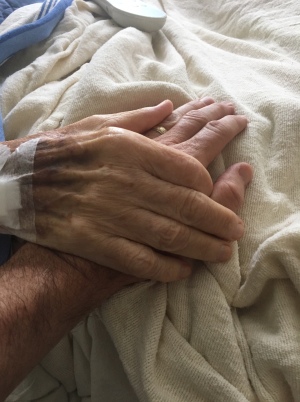 I can take a nap any time of day.
Five minutes at my desk. Ten

At the dining room table. Longer
In an uncomfortable wooden rocker.

My kids see it all the time, like
Clockwork; their father’s momentary

Ease. I didn’t see my father sleeping
Until last week after a long day

Of transfusions and transport,
He was asleep to the sounds of

Baseball on TV when I got
To his room and sat quietly by.

All the years of my life to see
His hands, his face, alive, at rest.

The low tide, bury themselves
Beneath the sand ripples,

The thought comes to the edge
Gently, again and again. You pile

Rocks to keep it at bay. It’s not
The thought that will drown you.

The rocks glisten in the sunset
Where the thought caresses them.

Even tears big as jetty stones
Disappear into the thought.

It’s enough, you think, to know
If you just lay on your back, relax,

The thought will support you,
Hold you to the sky like an offering. 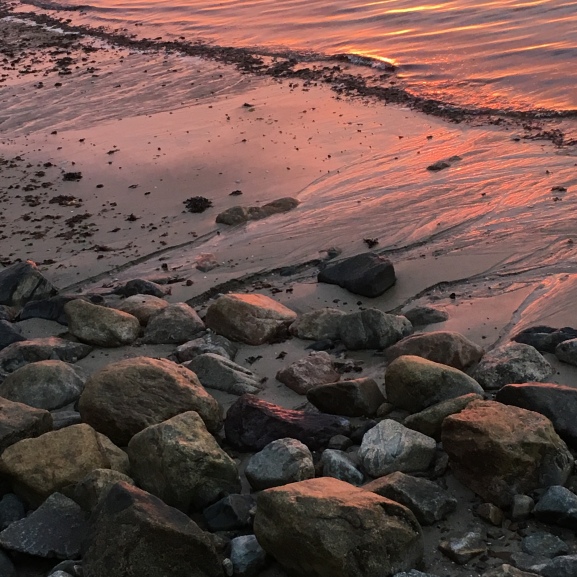 I could hear but heard the past most clearly, the voices in the moment
Warped like waves at a puddle’s edge bouncing backward

I could move but was walking ahead of myself, my feet traveling
over a landscape I could not feel beneath me

I could see but saw only context, I could smell but smelled only
The rainy earth of medicine 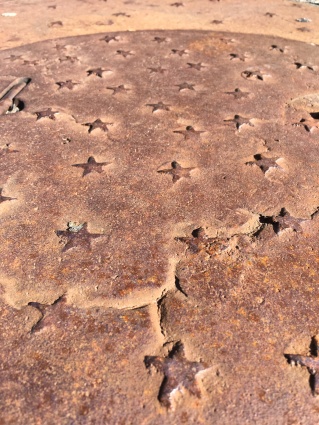