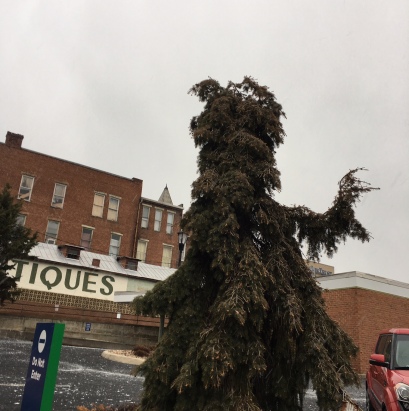 The brown regret of January grass:
A surface gesture only, as if it wants

to be covered by snow but who knows
what word it mouths when under the white smother.

Mild late afternoon, with the moon sailing
across the the clear day, almost invisible, like

as it was dragged trunk first through
the front door, a small wrapped thing landing softly

against a wall in the foyer, no name
tag: so the moon lands against the

bare trees, seen by almost no one.
Only when one looks unfocused

to the woods one feels like a crumpled
gift has been placed in the hand.

The sun meanwhile corrugates a cloud
over the tree-line, travels like a tourist

out of season to the nearby roofs,
To the backyard behind the shed

needle, twisting in the air as it accelerates
Like a knife thrown to kill the past.